What is your price point threshold for a good bottle of wine?

What is your price point threshold for a great bottle of wine?

During a yacht club dinner we started exchanging 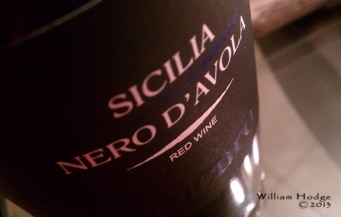 thoughts about about our personal wine choices for the evening’s dinner.  Now this is a fellow whose preferences lean to Justin Isosceles Reserves, which tend to run above $75-$80. Personally, we find ourselves in the Justin Isosceles (no reserve) zone where we’re spending $42 for a great bottle of wine.

So he surprised us with a recommendation for an Italian wine with a very low price point.

Nero d’Avola is a varietal typically grown in Italy, in this case, grown in Sicily. Known for blending, it’s a varietal of which we’ve never heard. Here is the distributor’s prose about this bottle of wine.

“The wine trade first flourished under the Greeks but waned under the Romans, Vandals and Goths before it all but disappeared for being taboo under Muslem rule. In the late 18th century the English created Marsala and Sicilia became the major source of fortified wine.  Sicilia’s popular grape varietals include Nero d’Avola, a robust red, strong on its own but excellent for blending.”

So off to the store we went, to Trader Joe’s!

We’ve never been a big fan of their wine (Bronco Company’s Two Buck Chuck being their claim to fame.) Once we read about a Bordeaux wine that was wildly popular with their customers, the price point being under $10. So, what the heck, let’s take a shot at this. Bringing the wine home, we uncorked it for dinner and let it sit for a while before pouring a taste. It was very sad, tasting such a poor wine. It promptly went down the sink and we began seeking a New World California wine in the cellar.

But now we were following the recommendation of a palate that leaned towards our tastes. It was certainly a worthy experiment.

This bottle of Vendemmia’s 2010 Nero d’Avola had a very familiar taste, and reminded us of the description we use for wine, as a “flower  bursting on your palate.” It was fruity, tasting of cherries and berries, but with enough tannin to balance against the fruit. And, its alcohol content was only 13%, a  typical European wine.

This bottle of wine reminded us of Apothic, a  California red blend (zinfandel, merlot, syrah & cabernet sauvignon.) Apothic Is available widely (including grocery stores) for $7-$10. They take great strides to hide the winemaker, but after some research we found a single press release about its pedigree. It turns out Apothic is a Gallo product, blended by a winemaker partner brought in specifically for the project. (Since we wrote this, we revisted Apothic. While the wines were similar, the Cab & Zin really are upfront and obvious in Apothic. The Nero d’Avola could use some Cab blended into it.)

So now, back to the subject at hand. What’s your price point threshold for this good bottle of wine?

How about, $4.99. We should put a line of exclamation marks behind that price point, but you get the idea. We were very surprised to find a five dollar bottle of  wine that was drinkable, fun and interesting.

We can’t help thinking though, what would this wine taste like with 20%-30% Cabernet Sauvignon? Remember, this is a blending wine.

They also make a Primitivo (a close cousin to Zinfandel) and some other wines on the shelf for $5….. all available at Trader Joe’s,  where we’re sure to spend a little money in the coming weeks. You’ll find it in the German/Italian shelf area. Experiment, grab a bottle of wine that you don’t know anything about it and give it a taste. Come back and share you thoughts.

Bill Hodge & Erin O’Neill-Hodge enjoy a good, interesting bottle of wine, visiting and enjoying wineries from Lake County to Orange County, from the Paso Robles Gold Coast to Gold Country and from Lodi to Bakersfield.

What Are People Reading?